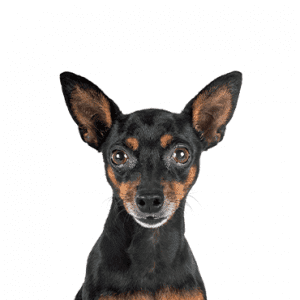 The Miniature Pinscher is thought to be an aged breed. However, the history books can only date it back to a couple of hundred years ago. As mentioned earlier, it originates from Germany where it is believed to have been developed for vermin hunting in homes and stables.

It was first called the Reh Pinscher in ancient Germany. This was because of its similarity to a small deer that was native to the forests of Germany years ago. A lot of people think the Miniature Pinscher is similar to the Doberman in appearance and many think it is a mini Doberman.

They would later be first displayed at the Stuttgart Dog Show in Germany. This took place later in 1900, a time when they were unknown outside of Germany.

The Miniature Pinscher wouldn’t get to the United States till around 1919 after the first world war. They were developed from the short-haired German Pinscher and the Italian Greyhound.

The King of Toys has a spirited, confident personality that is both exciting and frightening. He is highly energetic and very curious. He is an excellent detective and a good watchdog. He is always trying to probe into everything.

He loves to entertain and loves attention. His temperament is highly affected by the training received during his puppyhood.

The Miniature Pinscher is an escape artist who doesn’t lounge around the house. There would have to be raised fences with no crevice that they could dash through.

Provided they are well-trained; apartment owners could live comfortably with them. They aren’t however, advised to be adopted by people with cluttered homes.

Their high curiosity and vermin hunting instincts make them attack small objects like bottle caps, which can cause a choking hazard. If you can’t pay them the needed attention, it is advisable to put them in a crate.

The Miniature Pinscher is a fine-looking dog with coat colors like chocolate and rust, red, black and rust. He as a short outer coat that only requires brushing every few days to keep his coat shiny. Use a soft bristle brush for this.

Bathing should be limited to occasions when the Miniature Pinscher has rolled into something dirty or stinking because bathing dries its skin. You can, however, use a washcloth with warm water to wipe its coat. Daily brushing is also advised to avoid gum disease or bad breath.

Nails should be trimmed to prevent painful tears. Ears should be checked weekly for sores, redness and bad odor. The presence of this indicates an infection that needs to be treated immediately.

The unregulated breeders who are selling outside of the USDA regulations and without a license are what we consider to be “Puppy Mills.” We are committed to offering Miniature Pinscher puppies who will grow up to become important members of your family. We only purchase puppies from the very best sources, and we stand behind every puppy we sell.

If raised with kids who treat him carefully and kindly, the Miniature Pinscher would adore them and treat them well. However, if treated roughly by kids, he could become equally mean to them.

Yes, they do, if they are provided a suitable environment.

Personality tests can be carried out to determine which is best for you.

Miniature Pinschers are not heavy shedders. They are known to be moderate shedders.

They are great watch dogs even though they are aggressive and confrontational. They can serve as guard dogs but their forte is as watchdogs. They are quick to alert homeowners about the presence of intruders.

They are very expressive canines and can be excessive with their barks. They do this when they want their owner’s attention.

They don’t love to swim because their lean body doesn’t allow for efficient swimming.

There are some of these pooches who have lived more than 15 years but on average, they live for about 12-15 years.