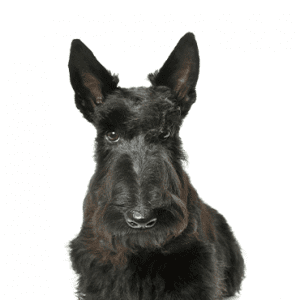 This breed of dog which is also known as the Aberdeen Terrier and popularly called Scottie for short was initially one of the highland breeds of terrier grouped under the name of Skye Terrier. Discover more about our Scottish Terrier puppies for sale below!

Scottish Terrier was initially bred in a bid to hunt down and kill vermin on farms in the highlands of Scotland. Its actual origin is obscure and undocumented. It has been native to Scotland for several hundred years, there is a popular belief that the original Scottish Terrier was brought in by the Celts. It was birthed by the western part of the Scottish Highlands and the Hebrides Island. The Scottish Terrier was loved for its superb working ability and gameness.

Scottish Terrier is known to be a dog of great independence and self-assurance; it is feistier than other terrier breeds. Its rugged nature has earned it the nickname ‘Diehard’ as it is one very alert, territorial and quick-moving dog. It is also a very playful and intelligent dog with great determination. It possesses a lot of drive and energy that needs to be channeled properly. It is brave but also loyal to its family.

The Scottish Terrier does relatively well in any environment as it is a breed that easily adapts. It doesn’t do well with hot climates; when in an environment surrounded by water, it should be properly monitored as it drowns easily as a result of its short legs hence, the need for constant supervision. Scottish Terrier requires ample space to romp around and it is recommended to keep this breed in a fenced environment to prevent unwanted chasing and biting. An apartment that is well ventilated and frequented by people is suitable for the Scottish Terrier.

A Scottish Terrier does well with daily exercises as it makes it happier and calmer. Activities such as a game of fetch, ball game, long walks would suffice for this breed. At least one hour of exercise a day is recommended for the Scottish Terrier.

Scottish Terrier is a breed that does not shed heavily but requires extensive grooming. Its coat needs to be combed at least three times a week in order to prevent matting. In addition, its beard requires daily cleaning and professional service should be hired from time to time. Grooming a Scottish Terrier requires a whole lot of effort as every strand of hair on its body has its own place.

The unregulated breeders who are selling outside of the USDA regulations and without a license are what we consider to be “Puppy Mills.” We are committed to offering Scottish Terrier puppies who will grow up to become important members of your family. We only purchase puppies from the very best sources, and we stand behind every puppy we sell.

Not all are black. Scottish Terrier comes in three different colors which are black, wheaten and brindle.

For the Scottish Terrier, it is recommended to consult a dietician and veterinarian so as to have an idea of what diet to supply it with. It should, however, be fed with at least 30percent vegetable, 40poercent meat, and 30percent starch and fats.

Scottish Terrier rarely develops any serious health issues; this is not to say there are no extreme cases to look out for though. Some common cases observed in this breed are cramps, liver disease, hemophilia, etc.

Scottish Terrier is born with floppy ears that stand on their own accord when it is around 10 weeks of age.

No. A Scottish Terrier’s ears should never be cropped; they will stand in their own time.

Yes. What it lacks in size, it makes up for in intelligence. Being originally designed as a working dog, it has a lot of drive and intelligence. Scottish Terrier can be stubborn though.

Most Scottish Terriers love to swim, although they are not natural swimmers. A Scottish Terrier’s short legs make it easy for it to drown and as a result should not be allowed near water unsupervised.

Puppies require a certain amount of time with their mothers during which they learn some important skills from her. STCA recommends that puppies should not be sold until they are at least 10 weeks old.

Scottish Terrier is a breed with very strong hunting instinct and will go after anything it considers to be a prayer. It is therefore advisable to keep it within a fenced environment or on a leash.

As long as the children are well behaved and also respect the Scottish Terrier’s independent nature, it is very easy for them to get along just fine.