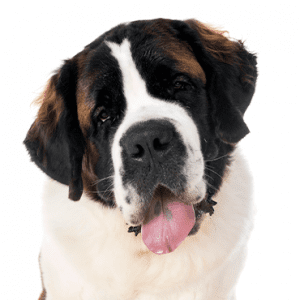 Bred for rescue, this huge working dog is a hero dog both in Switzerland and Italy. The Saint Bernard earned its fame due to its large size and through tales of its rescues. Discover more about our Saint Bernard puppies for sale below!

The hospice made it easier for people to cross the pass and the Saint Bernard dogs were used by monks to protect the grounds. The location of the monastery built the dogs into a breed that can survive in the cold. When the Saint Bernard became popular in other countries, their type began to change.

Crossbreeding made them taller and thinner. While some of these dogs are still at the hospice in Switzerland, they are no longer used to aid monks at the pass. They are now a reminder of the hospice history.

Saint Bernard’s heart is as huge as it is. Despite its big size, it is a sweet, patient and gentle dog breed. They love adults and children alike. The only threat they pose to little kids is knocking them over or involuntarily stepping on them. The Saint Bernard is sweet and affectionate. Socialization from an early age is important to expose them to new people, animals, and new environments.

Saint Bernard is best kept indoors. They are prone to heat strokes so keeping them outside permanently would be bad for them. They are also companion animals and they thrive when living close to people. Though they are big dogs, when trained they can live inside a house without destroying any properties. It is important that they are taken outside at least once a day to exercise.

Though Saint Bernard doesn’t need too much exercise, it is necessary that they get enough to prevent obesity. They are big dogs and carrying extra weight can affect their joints, leading to arthritis. At least 30 minutes of exercise daily is enough for the breed. Note that this breed is prone to heatstroke so exercises are best done at night. If you want to take it on a walk during the day, ensure it’s a short walk and take some water along. Also, pay attention to it for any signs of exhaustion.

Regular grooming is important to keep a Saint Bernard healthy. Brushing is required two to three times a week. If your dog grows mats on its thighs or ears, apply a detangler solution to straighten out the mat. Baths should be carried out monthly and outdoors because of their size. During the winter, it is best to bathe them indoors. Their teeth should be brushed at least twice a week and their nails should be trimmed monthly. It is also important that you clean their ears weekly.

The unregulated breeders who are selling outside of the USDA regulations and without a license are what we consider to be “Puppy Mills.” We are committed to offering Saint Bernard puppies who will grow up to become important members of your family. We only purchase puppies from the very best sources, and we stand behind every puppy we sell.

Yes, they are easy to train. Saint Bernards are gentle and obedient dogs that are always eager to please their owners.

The Saint Bernard loves everyone, both children and adults. They are especially affectionate towards the children they live with.

The average lifespan of a Saint Bernard is 8 to 10 years – although some might live longer.

Dogs of this breed may sometimes be susceptible to hip dysplasia, elbow dysplasia, epilepsy, cataracts, allergies, and GDV. Generally, they are a sturdy breed with little health issues.

The average Saint Bernard is 30 inches tall and weighs 180 pounds.

Saint Bernards are very gentle and calm dogs. Early socialization can prevent aggressiveness in the future.

No. Dogs of this breed hardly bark without a cause.

Saint Bernards are not the most intelligent dogs. They often take longer than most dogs to mature mentally.

Saint Bernards drool and shed heavily. They also tend to knock things over due to their large size.

Yes, Saint Bernards are very open to living with other pets, especially if they’ve lived with pets from puppyhood. It is important though to keep an eye on them when kept with smaller pets to ensure they don’t accidentally knock them over or step on them.

If you want a versatile, fun and affectionate dog, the Saint Bernard is the best dog breed for you!