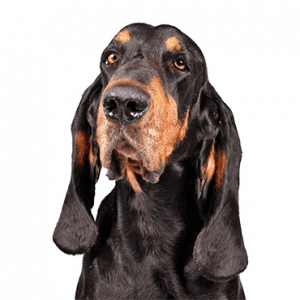 The Black and Tan Coonhound

The Black and tan coonhound is a breed that can be classified as “the hunters”. It is from the family of the bloodhounds and they are quite known for hunting only by the scent of a thing. They are mostly packed animals as you’d hear them howl from time to time but they could also be incredible pets too. Discover more about our Black and Tan Coonhound puppies for sale below!

The Black and tan coonhound is a breed known for its hunting capabilities as already mentioned. They descend from the Talbot hound which was in existence about a thousand years ago. The Talbot hound was known as a dog used by the kings and royalties for hunting. The black and tan coonhound originates directly from the English Foxhound. It was officially recognized by the American kennel club in 1945.

This dog is what you would call a born hunter. They could be deaf to the call of their owner because they are following the trail of a scent they picked up. So, they could disappear for hours following a scent.

They are mostly scent animals and they would thrive in a kennel outside the home however they could be made to live in homes and substitute their fellow canines for humans. This may also be a problem if he is left unattended because he tends to howl when he is lonely.

They have an amazing drive when it comes to prey and this means that they cannot get along with cats or other pets because the felines will be hunted.

The best place for a coonhound is an open space. More like an outdoor kennel where they get to interact with other canines. Where they are being adopted as pets, be sure to keep them occupied at all times. They need to be played with and allowed to run around so make it an open space. Make sure to supervise when they are around children as they can be very stubborn.

Seeing that the coonhound is a hunting dog, they need a lot of exercise to get by. They do make very good running or jogging partners as they love to be out with their tongues in the wind. They could wear you out but it is important to keep them properly exercised.

They are not ideal for the older generation. The problem is the fact that where they do not get enough exercise, they tend to become overweight and this is not ideal for a coonhound.

A coonhound has a very thin coat compared to the Bichon or Poodle. They also shed a lot so you should be prepared to see a lot of their fur on your couch and bed. To keep clean, you would need to brush his coat about two or three times weekly and be sure it is after a bath.

You would need to do this to distribute his skin oils evenly. Clean his ears too so you know when any problem arises. Brush his teeth twice a week and cut his nails too just so he does not go scratching your couch.

It could be an issue if he gets excited and jumps on you so be sure to take this seriously so you do not get wounded. If you brush his teeth daily, you would be sure of good breath and it would reduce or eliminate any infections present.

The unregulated breeders who are selling outside of the USDA regulations and without a license are what we consider to be “Puppy Mills.” We are committed to offering Black and Tan Coonhound puppies who will grow up to become important members of your family. We only purchase puppies from the very best sources, and we stand behind every puppy we sell.

Generally, they could be very friendly and easy to live with. They are also very territorial and are perfect for sniffing out strangers however they can be very stubborn and aggressive if not trained right.

With their owners and friends, they could be very protective and willing to please however they could be aggressive to other pets or even strangers.

Yes, they are. Since they are hunters by nature, they tend to be very smart and loyal and very intelligent too when seeking out prey.

As with every dog breed, the coonhound is susceptible to a number of diseases. They could have hip dysplasia where the thigh bone does not fit perfectly and this could cause lameness and a lot of pain. They could have arthritis when they age. They could also have cataracts which may affect their ability to see properly.

While the coonhound is a very intelligent dog, they are mostly distracted. For a first-time owner, it could be very frustrating as he could disappear at the slightest provocation. You would need a lot of patience with this one.

The average lifespan of a black and tan coonhound is about 10 to 12 years.

First of all, they should be fed appropriately and properly. That being said, you could split their meals to twice daily.

Coonhounds are hunters and they are likely to hunt down the cats. The classic cat and dog fight is what you would get except they are brought up together.

Coonhounds are very loyal and protective pets. Even with their stubborn attitudes, they do know who their owners are.

Just like other dogs or pets, coonhounds are very playful with their owners and love to cuddle too.

The black and tan coonhound is a perfect home protector if you live alone and they could be the ideal companion too.

Are you interested in purchasing a Black and Tan Coonhound?