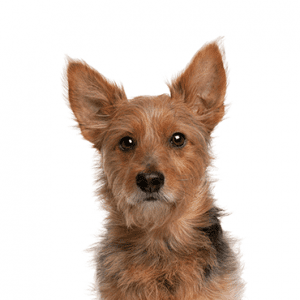 This breed is just a bundle of joy. The Australian Terrier is a small-sized dog breeds belonging to the terrier group. This breed lives up to its Australian title as it was first developed in Australia, however, it still comes from a long line of breeds in Great Britain. Discover more about our Australian Terrier puppies for sale below!

Commonly called ‘Aussie’ the Australian Terrier was developed to hunt and kill small animals or pests like rodents or snakes. They have also been celebrated as great watch dogs although their small stature would hint otherwise. This dog is obedient, delightful and a great companion for both kids and adults.

The Aussie was developed to kill rodents and snakes in areas with diverse temperatures like gold mines, waterfronts, sheep stations, etc. Their ability to face harsh conditions was paramount in the tasks they handled. This breed is Australia’s first recognized native dog breed. Years passed and a lot of migration later before the happy-go-lucky dog breed gained AKC recognition in 1960.

This dog is small in stature and they have a fun personality. They make great companions for diverse age ranges and they’re bubbling with energy. The Australian Terrier can run as far as their short legs can carry them, they are highly devoted to their owners and they’re great with kids.

This breed is clever, easy to train, and in the business of creating joy for its owners. They are far from aggressive and great for kids. The Australian Terrier can have separation anxiety as they usually follow their owners from one room to the other within the home.

However, this breed loves to be engaged in one form of sports activity or the other and they should be fine provided they aren’t left unattended for hours at a stretch.

The Australian Terrier is a small dog and as such is well built for apartment living. They appreciate open spaces but are equally comfortable in the confines of an apartment building. Hence you could either get a dog bed or snuggle up to your Australian Terrier as they love cuddles too.

This breed has a higher tolerance for hot weather than it has for the cold ones. The Australian Terrier adapts perfectly to a dominant owner and hence it is great for first-time dog owners. This dog breed is not only friendly with members of its human family, but it is also accommodating to other dogs and strangers too. They will be perfect in serene or quiet environments as they do not bark as much.

A dog of this size has a lot of energy waiting to be dissipated. The Australian Terrier is very energetic and needs an ample amount of exercise to prevent it from getting destructive later on as a result of boredom.

Simple dog exercises like fetch can go a long way in keeping the little one happy and exhausted when he returns. This dog breed is easy to train, intelligent, has an insane drive for prey so you may have to lure them with mice during training.

They also have the potential to wander when taken off the leash hence, unless your Australian Terrier is fully trained, be prepared to run after him once you take off his leash.

The Australian Terrier has a rugged coat that sheds slowly and at the barest minimum. This breed doesn’t require a lot of grooming procedures as owners can brush him weekly, bathe him every three months unless he’s gotten into something whose evidence has to be eliminated.

If the frequency of baths is increased, the Australian Terrier’s hard coat may soften and while this isn’t life-threatening for the dog, it does mar its physical appearance. In the same vein, Australian Terrier’s toenails can be trimmed once a month while owners can check his body parts for traces of redness, inflammation or bad odor.

The unregulated breeders who are selling outside of the USDA regulations and without a license are what we consider to be “Puppy Mills.” We are committed to offering Australian Terrier puppies who will grow up to become important members of your family. We only purchase puppies from the very best sources, and we stand behind every puppy we sell.

This dog breed can live up to 15 years.

A fully matured American Terrier can weigh anything from 14 to 16 pounds.

This dog breed is particularly popular among children as it matches their energy levels and offers a great company.

The Australian Terrier is fairly easy to train.

Nope, they most certainly do not.

The Australian Terrier is a healthy dog breed, they do not have any hereditary illness. However, dogs of this size are prone to either allergies, diabetes mellitus, leg-Perthes, or patellar luxation.

The Australian terrier has a lot of good features but their best would be their ability to hunt despite their short legs.

This dog breed comes in three color types, they include; Sandy, Red, and Tan. The tan-colored Australian terriers have a blue saddle too.

Yes. They do not require intensive or frequent grooming and they can be fed twice a day excluding dog treats.